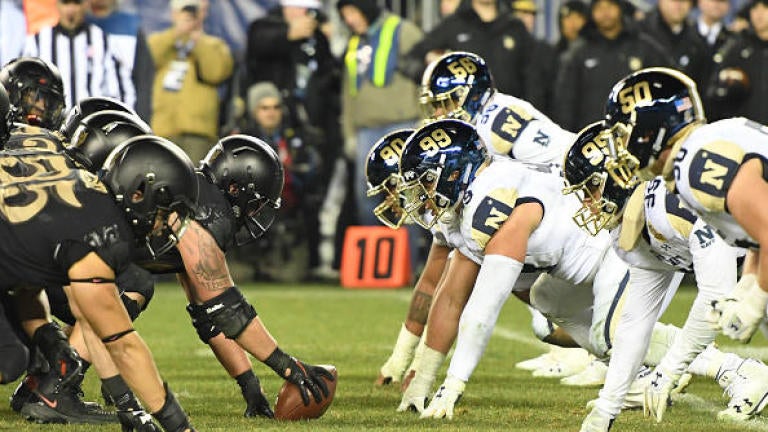 We ran 10,000 computer simulations to predict the outcome of Saturday's annual Army-Navy game.

Saturday marks the 120th all-time meeting between the two service academies with Navy holding a 60-52-7 edge in the series. Navy won 14 straight from 2002-2015, but Army has won three straight since snapping that streak.

After winning double-digit games in each of the last two seasons, Army comes into this game at just 5-7 on the year. Army looked like they had a chance to replicate their recent year's success early in the season when they took Michigan to OT in Week 2, but the Black Nights went on to to lose 5-straight games from Oct. 5 to Nov. 2. Against FBS teams, Army is down a whole TD from 33 PPG to just 26 PPG this season. Army has especially struggled away from home this season scoring just 21 PPG compared to 33 PPG last season. Army doesn't pass often but had been much more effective doing so last seeing scoring on 8.1% of passing attempts compared to just 4.7% this season.

Navy has bounced back nicely from a 3-10 season last year and enters this game at 9-2. Navy's two losses this season have come at 12-win Memphis and at 10-win Notre Dame. Navy has upped their scoring production from 25 PPG last season to 39 PPG this season, while also holding opponents to just 24 PPG compared to 34 last season. Navy is scoring on 9.4% of passing attempts and 7.1% of rushing attempt this season, which is up substantially from 4.4% passing TD rate and 4.7% rushing TD rate from last season.

Prediction: Our sims have Navy winning this game 27 to 21. The biggest difference between our sims and Vegas' predicted score of 25.5-15 is Army hitting 21 points compared to 15. Army has averaged 21 points away from home this season and has scored 21 or more in all but two games since Seek 1, while Navy is giving up 24 PPG this season and 40.3 PPG over their last three games.

The under has hit in 13 straight games since 2005, but our sims expect that to change this season. The weather may play a factor in this game with a chance of rain, but Philadelphia is forecasted to be 51 degrees at kickoff. I think the over is a better bet this season than in years past at just 40.5 points, while Army is still a good bet ATS at +10.5. The winner of the rivalry game has won by a TD or less in 7 out of the last 8 matchups and tend to play each other closely.