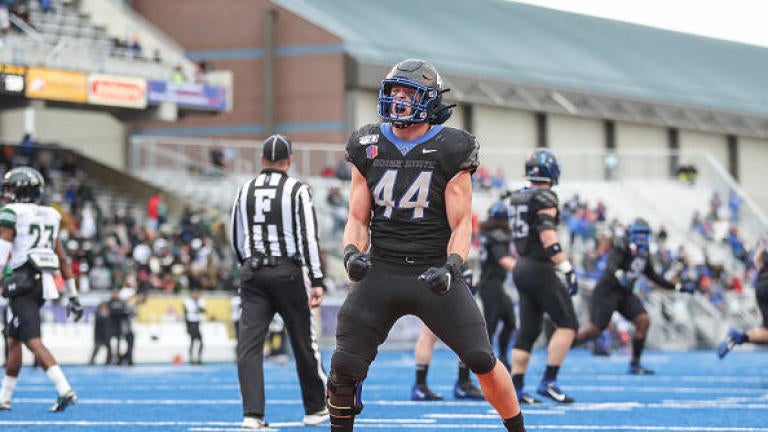 We ran 10,000 computer simulations to predict the outcomes of today's bowl games.

Preview: San Diego State (9-3) is averaging just 19 points on offense this season but was able to win 9 games this season in large part because of a defense that ranks 4th in the FBS at 12.8 points allowed game. San Diego State has been reliant on their running game over the past several seasons with running backs Donnel Pumphrey and Rashaad Penny, but their leading rusher this season is Juwan Washington at just 500 rushing yards. The Aztec defense has been their true calling card this season. The Aztecs have given up more than 20 points just twice this season, and has allowed less than 17 points in their remaining 10 games. Th Aztecs are giving up TDs on just 2.6% of passing attempts and 2.3% of rushing attempts.

Central Michigan (8-5) has had quite the turnaround from a 1-win season last year. CMU has rushed for 35 TDs this season and has averaged nearly 3 rushing TDs a game but is facing a SDSU defense that is giving up just .6 rushing TDs a game. The biggest struggles for Central Michigan have come away from home where the Chippewas are averaging just 22 points and giving up 36 points/game. If Central Michigan is going to win this game, they will need to take care of the ball. They are turning the ball over 2.8 times/game when on the road, and San Diego State takes the ball away from their opponents nearly 2 times a game.

Picks: Our sims have an A pick on San Diego State -160 ML. The Aztec's defense is going to cause trouble for CMU's offense in this game. I would stay off the O/U at just 40.5 points but wouldn't be surprised if the game goes under.

Preview: FIU (6-6) has been hard to predict this season. The Golden Panthers beat Miami at home but has also suffered blow out losses on the road to 4-8 Middle Tennessee State and 6-6 Tulane. FIU has had a bit of a down season after winning 9 games last season. The Golden Panthers have struggled significant;y away from home this season where they are 0-5 straight up and 1-4 ATS. Arkansas State (7-5) contrasts quite a bit in style from FIU. They Red Wolves are a pass first team that has struggled on defense this season. FIU  has the top passing defense in CUSA, and the FIU secondary vs. Arkansas State WR Omar Bayless, who has nearly 1500 receiving yards and 16 TDs this season, is a matchup to watch. If FIU shuts down Bayless, they have a good chance at winning the game, but that is no easy task.

Picks: Our sims have an A pick on Arkansas State -117 ML. I think that is very good value for Arkansas State. FIU is 0-5 on the road is being outscored by an average of 21 points/game (19-40). I would also lean on over 60.5 in this game with Arkansas State's up-tempo offense.

Preview: Liberty is looking to become one of just 3 teams to win a bowl game in its first season being eligible after moving from the FCS to the FBS. One of the two teams that has accomplished this feat is their opponent Georgia Southern (the other is Appalachian State). Liberty is lead by former Ole Miss HC Hugh Freeze and senior QB and 4-year starter Buckshot Calvert. Calvert will have a favorable matchup against a Georgia Southern team that is giving up a TD on 7.5% of opponent's passing attempts. Liberty will need to be able to stop the triple-option if they are going to win. Liberty isn't likely to stop Georgia Southern's rushing attack the entire game, and it will likely come down to key 3rd or 4th down stops if they are going to win.

Picks: Our sims like Liberty +6 in their inaugural bowl game. The sims expect Buckshot Calvert to have success through the air against Georgia Southern's defense but has Georgia Southern coming out with a 1 point victory. I like the over 58 in this game as neither defense has been particularly strong this season.

Preview: This game is pretty much a home game for FAU, but they have a ton of questions heading into this matchup. FAU's HC Lane Kiffin bolted Boca for the SEC and will be Ole Miss' next HC. FAU will also be playing without their top two receivers, TE Harrison Bryant and WR DeAngelo Antoine, and their leading rusher, Malcolm Davidson, is also out. FAU is 10-1 in their last 11 game but could have trouble finding weapons to score in this game. SMU is coming into the game at 10-2 and ranks 7th in the FBS scoring 43.0 points/game. Texas transfer QB Shane Buechele and RB Xavier Jones have emerged as stars this season. FAU's passing defense has been questionable at times this season, and Beuchele could be due for a big game.

Picks: The Sims had SMU as an A pick, but the spread moved from -3 to -8 and is now a C pick. I still would lean on SMU with all that FAU has lost coming into this game. The better bet in this game might be Over 64.5

Preview: The big story line in this game is Chris Petersen coaching in his final game before retiring while facing the program that he helped lead to prominence. Washington has been a bit of a disappointment this season at just 7-5. Some even thought the Huskies could be a darkhorse playoff candidates before the season. QB Jacob Eason looks like an NFL QB and could be playing in his final game for Washington tonight. Eason has struggled at times against mediocre opponents, but has also shined against top competition. Washington's offense has been more productive this season than last, but their defense has uncharacteristically struggled in several games this season. Boise State would love to spoil Petersen's final game and come away with a win. The Broncos are 12-1 this season, and their lone loss came on the road at BYU by 3 points with a backup QB. Boise State's QB situation is questionable in this game with Jaylon Henderson missing practice the past few days with an illness. If Henderson is unable to go, Freshman QB Hank Bachmeier, who started a majority of games this season, will probably get a bulk of the snaps. Boise State's defense has come on as of late, and it will be interesting to see how they handle a PAC12 offense.

Prediction: Boise State won the last two times these teams faced in 2015, 16-13. Boise has a history of knocking off Power 5 opponents and should keep this game close. The sims like Boise to barely cover the 3.5 point spread. I would probably stay off the O/U, but the sims have the over hitting by just .5 a point.

Preview: Appalachian State will be playing under its third head coach in 3 seasons after Eliah Drinkwitz left to become the coach at Missouri just one season after Scott Satterfield left for Louisville. Former Mountaineer OL Shawn Clark will take over as the next HC of his alma mater. On paper, App State has been the much better team this season. They are 12-1 on the season and just won a Sun Belt Championship. App State knocked off both South Carolina and North Carolina this season which is an incredble accomplishment for a Sun Belt team. UAB is 9-4 this season but hasn't faced the same level of competition as Appalachian State. The Blazers are coming off a 49-6 blowout loss in the CUSA championship game, and the Blazers were also blown out by Tennessee and Southern Miss this season. Appalachian State is a heavy favorite for a reason, but it will be interesting to see how they handle the loss of their HC.

Picks: Our sims have UAB barely covering the 16.5 point spread. I like App State in this game. I think QB Zac Evans and RB Darrynton Evans will be too much for UAB to handle. UAB's QB Tyler Johnston has been shaken up lately and hasn't performed well even when healthy. App State has one of the better defenses in the Group of 5 and will pose trouble for whoever lines up behind center. UAB has also really struggled to run the ball this season. RB Spencer Brown has rushed for just 527 yards this season after running for over 1200 yards in each of his first two seasons. I would also lean Over 47.5 in this game.