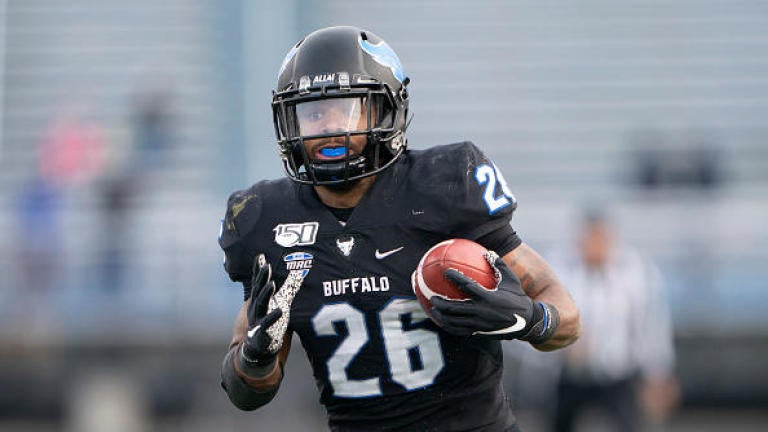 Bowl season kicks off today with Buffalo playing Charlotte in the Bahamas Bowl and Utah State facing Kent State in the Frisco Bowl. We ran 10,000 simulations to predict the outcomes of today's matchups.

Preview: Buffalo (7-5) comes into this game having won 5 out of their last 6 games after a slow start to the season. The Bulls are averaging 42 points a game over their last 4 games and have eclipsed 300 yards rushing in each of the last 2 games. Buffalo has the nations' 9th best rushing attack this season at over 250 yards/game and has a favorable matchup against a Charlotte defense that ranked in the bottom of CUSA giving up nearly 200 yards/game. Charlotte comes into this game having won 5 straight, but outside of Marshall, those teams had a 10-38 combined W/L record. Charlotte is 1-3 ATS when giving up 200 rushing yards this season, and out sims have Buffalo rushing for 240 yards in this matchup.

Preview: Utah State has had some drama this week with their starting QB Jordan Love and RB Gerold Bright both being cited for possession of marijuana. Love has already stated his intentions to enter the NFL Draft following this game, while Bright is also playing in his last game as a senior. Utah State decided against suspending either player because it was the first offense for both players. This game is important for Love who will have many scouts watching him play tonight. Love has a 17/16 TD-to-INT ratio this season after throwing for 28 TDs to 5 INTs last season. Love has a good chance to sneak into the first round of the 2020 NFL Draft and is one of the most physically talented QBs in CFB. Love will have a favorable matchup against a Kent State secondary that has been porous at times.

Kent State has had quite a turnaround this season. The Golden Flashes had gone 4-8, 2-9, 3-9, 3-9, 2-10, and 2-10 since 2013 before going 6-6 this season to become bowl eligible. Perhaps the biggest reason for Kent State's success this season is QB Dustin Crum who took over for Wody Barrett as the starter and has an 18/2 TD-to-INT ratio this season and 560 rushing yards. However, in 4 games against non-conference opponents this season, Kent State is averaging just 12.25 points/game and will have another tough game against a talented Utah State team.