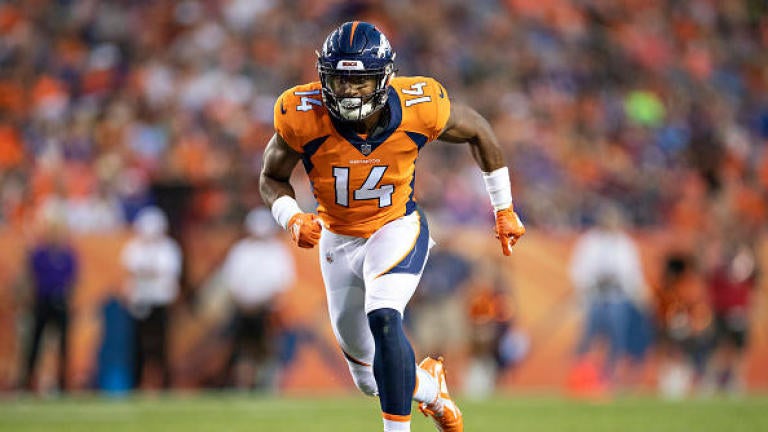 Thoughts: Johnson ran for 641 yards on 118 attempts (5.4 AVG) last season as a Rookie. Johnson missed the last 6 weeks of the season due to injury, but he looked like the RB that the Lions have been searching for when he was healthy. Johnson eclipsed 100 yards twice last season and his 5.4 yards per carry was good for second in the NFL. The Lions' 59.9 run blocking grade was tops in their division, and their O-line should be just as good or better in 2019. Johnson is projected to run for 907 yards and 7 TDs on 197 attempts this upcoming season. The 4.6 yards per carry is a bit of a drop from a season ago but not surprising given the increase in carries. Johnson should be close to 1,000 yards this season if he remains healthy. I expect big things from Johnson this season.

Thoughts: Jones was suspended for the first 2 games a season ago after violating the NFL's substance abuse policy, but he looked electric when he returned. Jones ran for 728 yards on 133 attempts (5.5 AVG) in his second NFL season last year. Jones' 5.5 yards per carry was the best in the NFL among qualified running backs. The Packers have a strong offensive line and a very dangerous offense with Aaron Rodgers at QB. The Packers have been a pass heavy team in recent years, but the threat of Jones can put their offense on another level. SportsLine projects Jones to rush for 921 yards and 10TDs on 175 carries this upcoming season. If Jones remains healthy, he should breakout with over 1,000 yards in 2019.

Thoughts: Sutton tallied over 700 yards as a rookie a season ago, and that was with Case Keenum as his quarterback. The Broncos brought in Joe Flacco and Drew Lock to compete for the QB job and either option should be better than Keenum. Sutton stand at 6'3", runs a 4.54 40, and his 18.6 yards per catch ranked 7th in the NFL among qualified players a season ago. SportsLine projects Sutton to tally 785 yards and 5TDs on 46 receptions in 2019. I would not be surprised if Sutton passes Emmanuel Sanders as the Broncos' leading receiver in 2019 with over 1,000 yards.

Thoughts: The Seahawks' 2017 7th Round Pick could be due for a breakout season with Doug Baldwin retiring. Tyler Lockett most likely moves into the #1 role, while either David Moore or D.K. Metcalf will be the #2 receiver. I expect Moore, who was the Seahawks' third leading receiver last season, to take control of that #2 spot and have a big season. Moore SportsLine projects David Moore to finish the season with 37 receptions for 588 yards in 2019-20. I expect Moore to outplay this projection and breakout with around 800 yards this season.

Thoughts: O.J. Howard has showed glimpses of why he was the 19th overall pick in the 2017 NFL Draft, but this is the year that he puts it all together. In 10 games last season, Howard had 34 catches for 565 yards and 5TDs. SportsLine projects a big year from Howard this season and have him with 63 catches for 930 yards and 7TDs. Howard's projected totals are higher than those of George Kittle, Jared Cook, and Evan Engram. Howard was on track for over 900 yards last season before going down with a foot injury, so those projections make sense. New HC Bruce Arians' offense hasn't been known for TE usage, but the 6'6" Howard has the speed to play some receiver and lineup in different spots. WRs DeSean Jackson and Adam Humphries are gone from a season ago which should lead to Howards and another possible breakout player, Chris Godwin, getting more targets, and the Bucs should have a pass-heavy offense with no proven running backs on their roster. If healthy, I think Howard could be the third best TE this season behind Ertz and Kelce.

Thoughts: Antonio Callaway is a player that I wouldn't be surprised if he breaks out in 2019-20, and I wouldn't be surprised if he has a mediocre season. With Odell Beckham and Jarvis Landry as the clear top-2 receivers for the Browns, Callaway will look to take advantage of teams that put all their effort into guarding these two veterans. A team will likely have their third best corner on Callaway, and I'm not sure if there is a third corner on any team that can keep up with Callaway. SportsLine projects Callaway to finish the 2019-2020 season with 55 catches for 747 yards and 6TDs. These numbers are a step up from the 43 receptions for 586 yards and 5 TDS from a season ago. Callaway has said that he hopes to have 1,000 yards receiving this upcoming season, which might be hard to do as the No. 3 receiver but is not unrealistic with Baker Mayfield at QB.

Thoughts: Mark Andrews wasn't even the first TE taken by the Ravens in the 2018 NFL Draft--that title belongs to Hayden Hurst who was drafted 25th overall by the Ravens—but Andrews was the most effective TE a season ago in a TE heavy Baltimore offense. In his rookie season last year, Andrews had 34 receptions for 552 yards and 3 TDS in just three starts. Andrews was the leading receiver with Lamar Jackson at QB, tallying 13 receptions and 308 yards with the Rookie QB playing. SportsLine projects Andrews to finish 2019-2020 with 38 receptions for 579 yards and 4 TDs and to finish as the 15th ranked fantasy football tight end. I would not be surprised if Andrews surpasses these numbers, and I think he has top-10 TE potential. Lamar Jackson is often compared to Michael Vick, who loved to find his tight ends. TE Alge Crumpler had three seasons of 700+ receiving yards with Vick as his QB. TEs are often good safety blankets for running quarterbacks, and the Ravens love to use their TES. I could see Andrews having over 700 yards receiving this season. The only concern I would have is the possibility of Hayden Hurst and the other TEs on the Ravens taking some targets away from Andrews.

Thoughts: D.J. Moore was very impressive as a 21-year-old rookie last season with the Carolina Panthers. Moore, the Panthers' first round pick in 2018, had 55 receptions for 788 yards and 2 TDs in his rookie season a year ago. 788 yards led all receivers on the Panthers roster and was the second highest total on the team behind only Christian McCaffrey's 867 receiving yards. Moore is electric and able to get open in a hurry. SportsLine projects Moore to finish 2019-2020 with 59 receptions for 901 yards and 4 TDS and to finish as the 33rd ranked fantasy wide receiver. If Cam Newton is healthy next season, I believe Moore will surpass 1,000 receiving yards and be a top-20 fantasy receiver. Outside of Moore, and maybe Curtis Samuel, the Panthers have a relatively week WR core. I expect Moore to see many targets next season.

Thoughts: The departure of Antonio Brown opens a lot of targets for Steelers' receivers this season. Washington could be one of those receivers that benefits from Brown's departure. Washington had a quiet rookie season after being a second-round pick in 2018, finishing his rookie season with just 16 receptions for 217 yards and 1TD. SportsLine predicts a big 2019-2020 season from Washington with 57 receptions for 813 yards and 4 TDs. These would be great numbers for Washington, who has been drawing great reviews during the Spring. Big Ben loves to air the ball out and look for Washington to have a much improved second season.

Thoughts: The Cardinals have made a big effort to overhaul the wide receiver talent on their roster, adding Kirk, Isabella, and Hakeem Butler in the last two NFL Drafts. Larry Fitzgerald is still on the roster but is now 35 years-old and isn't getting any younger. Christian Kirk showcased some of the explosiveness last season that led to him being a second-round pick, finishing with 43 receptions for 590 yards and 3 TDS in just 12 games. It is also worth noting that Kirk put those numbers up with Josh Rosen, who struggled as a rookie and then traded, at quarterback. Kirk now has 1st overall pick Kyler Murray at QB and Kliff Kingsbury and his Air Raid Offense.  Kirk already has experience playing with Kyler Murray when the two were briefly teammates as Freshman at Texas A&M. SportsLine projects Kirk to finish 2019-2020 with 67 receptions for 929 yards and 5 TDs. Those numbers are worthy of a mid-round pick and should excite fantasy football owners.

Visit Sportsline to get the latest lines, updated projections, best values, and picks from some of the top Vegas handicappers.